Q: Tell us about your college career and what the recruiting process was like?

A: Coming out of high school in Texas is a lot harder than in other places because Texas is so big as well as everyone plays football down here. With that being said, the recruiting process was not as difficult on me as others. I committed to Boise State the summer before my senior year and had a handful of offers that ranged from Utah State to Yale. I chose Boise State because it was the best football school out of my offers as well as those coaches consistently played DBs that were my build. Once I signed, the DC and CB coach left for other schools and the LB coach became the DC. I played my true freshman year at Boise State on special teams and sometimes at the end of blowout games. My sophomore season, I started the first 4 games against Troy, Washington State, New Mexico and Virginia and did really well. In fact I was named the highest rated player going into that Virginia game via PFF. But, midway through that Virginia game I had a mild injury and the staff held me out the remainder of the game. From that point on, I didn’t play a meaningful snap for the rest of my time there. The reason for it was that the DC just preferred bigger and thicker bodied CBs out there. So after trying to work my way back on the field each week and nothing changing, I decided to transfer. When I left Boise State, the plan was to go to Baylor but it fell through. Duquense offered me a full scholarship first, then University of Texas said they would get me a scholarship the following Spring, and University of Oklahoma offered me a preferred walk-on spot. I ended up choosing Duquense because they offered me a full scholarship and I didn’t want my parents paying for my college education. At Duquense I did extremely well. My first season, I was a starter and had 5 PBUs, 1 Forced Fumble, I didn’t give up any touchdowns in man-to-man coverage, I only allowed 2 catches over 15 yards the entire season. My senior season, I had 4 INTs, 6 PBUs, I didn’t give up any touchdowns in man-to-man coverage again, and I only allowed 1 catch over 15 yards the entire season. After the season I was named 1st Team All NEC.

Q: What would you consider to be your biggest accomplishment in your sports career so far?

A: My biggest accomplishment in my career so far was being able to lockdown a side of the field for both years I was at Duquense. My entire senior season I finished with a Passer Rating of 9.48.

Q: What do you consider to be one of the more important things you learned from the coaching staff?

A: While playing at Duquense, the most important thing I learned was that no matter the circumstances, there’s always a way to prevail through it. The motto at Duquense is “Dukes Adjust”, meaning that even if things don’t go as planned, we will find a way to succeed and keep pushing forward.

Q: What was your major and what are your plans if football doesn’t work out?

A: I earned my degree with a major in Communication Studies and a minor in Business. Post football, I want to stay in the sports world in any way I can.

Q: What would your current/past teammates say about you and your qualities?

A: I think tht my teammates would say that I’m a selfless leader, someone who relates to everybody, and continually pushes to be great day in and day out.

Q: What has been one of the most memorable plays of your career at any level?

A:  The most memorable play would have to be my interception in our last game against Central Connecticut State this past 2019 season. I did a 180 flip backwards, bounced off my shoulders and landed sitting down. I still held in to the ball though haha.

Q: What has been your biggest challenge and how do you manage it?

A: My biggest challenge was transferring schools because when you transfer, you’re going into the unknown by taking that step. But it just made me really trust in God and believe that he had a better plan for me which he did in bringing me to Duquense.

Q: If you could compare yourself to a pro athlete, who would that be and why?

A: Chris Harris Jr. I’ve been watching him for years because he’s been consistently dominant, he’s the same build as I am and has played both CB and Nickel, which is what I’m projected as.

Q: What is your biggest strength that you bring to a professional team and why should pro scouts consider you?

A: My quickness, my technique, and my knowledge of the game. My quickness because WRs routes are getting more dynamic so you have to have that athletic quickness to adjust (my fastest 3-cone recorded is 3.86 and my fastest L-drill recorded is a 6.33). Technique because I’ve been working on it since the 6th grade and am obsessed with trying to perfect my craft. My knowledge of the game because I watch hours on end of film and truly enjoy being a student of the game.

Q: Are you involved in mentoring, a charity or do you “give back”/”pay it forward” in your community

A: Not to one charity directly but I have donated money to ocean clean ups, Amazon rainforest help and most recently the wildfires in Australia. I am also a part of the National Communications Honor Society (LPE) which is involved with various community service events/ activities.

Q: How are you preparing for the 2020 National Scouting Combine and what are your goals?

A: I am currently training at Michael Johnson Performance Center in Texas to get ready. My goals for the combine are to show the scouts how much of a great prospect I am from the testing to the DB drills.

Q: What would be your ultimate achievement?

A: The ultimate goal is to get that one opportunity on a team. Once I get that I’m ready to do anything for the team from CB to anywhere on special teams to even holding for extra points.

Q: What do you enjoy doing when not playing football?

A: Hanging out with friends and learning new things (I’m currently trying to become fluent in Spanish).

Q: Who is or has been the most influential person in your life?

A: My parents. Seeing where they came from and the life that they’ve given me since I was little, that showed me that anything is possible that you set your mind to.

Q: What is something unique about you that people would find interesting?

A: Im learning to become fluent in Spanish, pero yo necesito trabajar más. 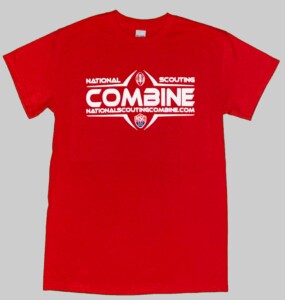